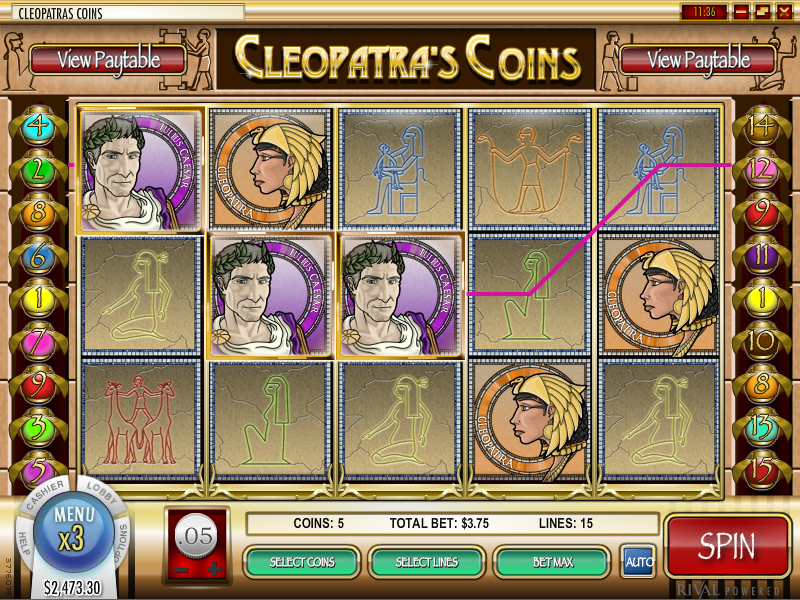 Cleopatra’s Coins is one of the most legendary and popular slot machine games of all times. This game is a rather simple slot, but with excellent touches and more importantly, huge chances of winning. The reels of Cleopatra’s Coins pay homage to Ancient Egypt and feature some of the most prominent characters of this golden era. A wonderful introductory video announces what’s to come when spinning this radiant slot: a chance to spend time with the Queen of Egypt whilst creating rewarding combinations on the 5 reels and 15 paylines.

Cleopatra’s Coins is packed with fantastic bonus features and prizes. The game is for every bettor type with coin denominations ranging from 0.01, 0.05, 0.10, 0.25 and 0.50 with a maximum wager of 5 coins per line. The default bet configuration is 20 x 10 coins per line. The array of betting options in this slot is plentiful and players can choose to hit the spin button or the Autoplay feature for an easier ride through the sandy reels.

Ancient Egypt is home to more than the Great Pyramid of Giza when it comes to the reels of this particular slot, which also features wild symbols, scatter icons, bonus features, free spins and very rewarding payouts.

The wild symbol in Cleopatra’s Coins is the Scarab that can make an appearance anywhere on the reels but will only count on paylines that have been enabled. Cleopatra’s Coins features two scatter symbols, the Cobra and the Gold Coin. Julius Caesar and Mark Anthony, the pyramids, hieroglyphics and more Ancient Egypt images plus the beautiful Queen herself are all part of the remaining symbols present on the 5 reels of a mystifying slot machine that captivates players from the very first spin.

Landing five of the Wild Scarabs will land the jackpot of up to 5,000 coins, however this is only possible while spinning with the maximum active paylines amount of 15. Getting three to five of the scatter Cobras on the reels triggers between 10 and up to 100 free spins with a 3x multiplier. The Gold Coin symbol activates the special vases bonus round whenever three Coins appear anywhere on the reels. A total of 12 vases appear on the screen, however bettors are allowed to smash either 3, 4, or 5 vases depending on how many symbols appeared on the reels that triggered the slot bonus round. Cleopatra makes it very clear that no emperor or general will ever have her treasures. On the other hand, the Queen encourages players to choose from the different vases on the screen to claim her most secret and valuable prizes, which can amount to a hefty amount of coins.

—
Mother’s Day is just around the corner – the perfect holiday to spin the reels of a fabulous slot such as Cleopatra’s Coins with a special 275 Free Spins. New and existing Superior and 24VIP Casino players that make a small $30 deposit are eligible to claim this promotion from May 13th and until May 20th. There’s a $0.15 cap per spin and a 20x playthrough requirement before players can request a withdrawal. This is a one-time offer with this exciting slot.  Contact us for more details on how to promote this offer!